The danger of a dog eating quickly and how to help 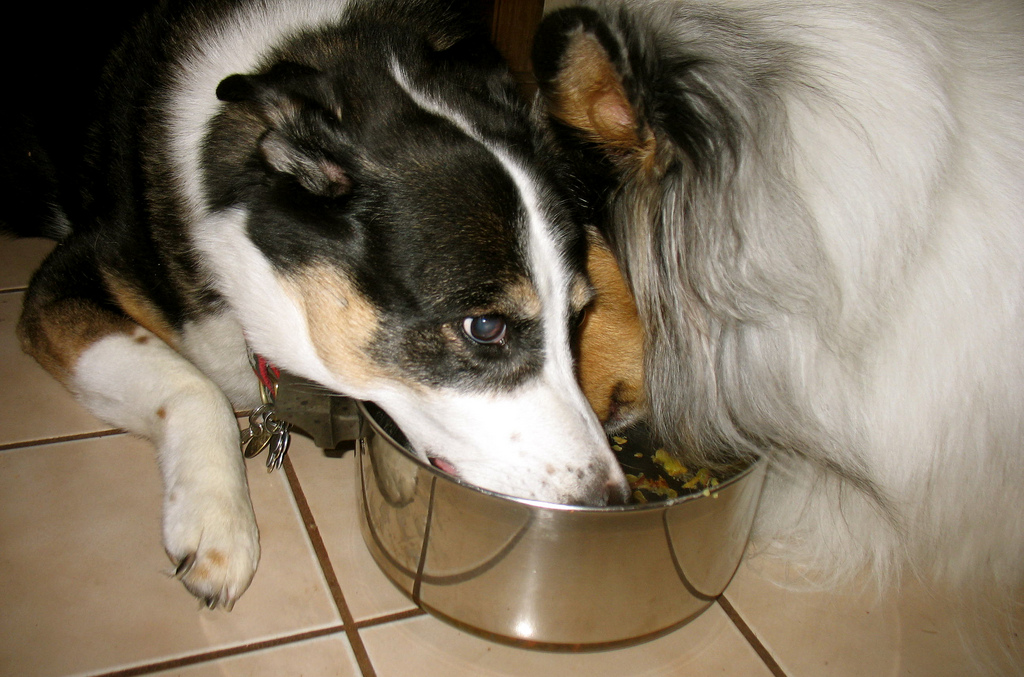 Many dog owners have experienced it at some point:

Your dog hears the sound of their food hitting the bottom of their bowl and comes skidding into the kitchen seemingly at the speed of light, barely stopping in time to prevent a face plant.

It’s funny until it’s not anymore – the first time you see them inhale their meal so quickly you realize you should be worried about their safety.

Dogs’ natural excitement about nearly everything around them is lovable and amusing in most cases, but with certain things (like eating, or inspecting potentially poisonous food sources) it’s up to us as their caregivers to protect them from themselves.

I got lucky with my own dog, Buster, because he’s never had a propensity for inhaling everything he can find, including what’s in his own bowl. I pour a day’s worth of food into his bowl every morning and he’s perfectly content to slowly make his way through it over the course of the day, which has been a lifesaver on days when I was running late heading home from work.

He’s also never been particularly food aggressive, meaning he doesn’t get defensive while he’s eating. I could stick my hand in his bowl as he’s eating and the most he’d do is give me that special look he reserves for when he thinks I’m being particularly annoying. (Usually, I only get that look when I’m trying to get him in the tub or want to cuddle him when he’s not in the mood.)

All of that is definitely a good thing in my case because at 23, when I adopted him, I was a first-time dog owner and I think I would have felt a bit lost when it came to dealing with the problem if he had been a quick or aggressive eater.

Not everyone is that fortunate, though, and in the years since I adopted Buster I’ve learned a lot about what it means to be a responsible dog owner, because while loving your dog and wanting the best for them is mandatory, it isn’t always enough.

Read on to find out how to deal if your dog seems to think food is an adequate substitute for oxygen while they’re eating.

In short: Dogs may be wired to eat quickly, but that doesn’t mean they should. Eating too quickly could lead to choking, vomiting or bloat, so it’s important to train your dog on impulse control or use special bowls or mats to slow them down.

Why do dogs eat quickly?

Dogs eating like their life depends on it even when they live a safe, comfortable and even cushy existence is so common that it’s not considered a quirk of having a dog; it’s more or less expected.

That tendency largely came about because of how they evolved. Dogs and wolves come from a common ancestor, so they share some similar tendencies.

That includes the tendency to eat quickly. In Why Dogs Do That, A Collection of Curious Canine Behaviors, Tom Davis writes that when non-domesticated social animals like wolves bring down prey, they eat competitively because it helps them survive. Dogs are social animals, too, so it appears that trait has lived on in them as they’ve evolved.

There are other reasons your dog may eat too quickly. They may have had to compete with a little for food as a puppy, or they may even have to compete with other household pets now.

If your dog is a quick eater and doesn’t respond to training or seems distressed by your attempts to slow them down, it’s best to have a veterinarian check them out to make sure there aren’t underlying illnesses causing their hunger. 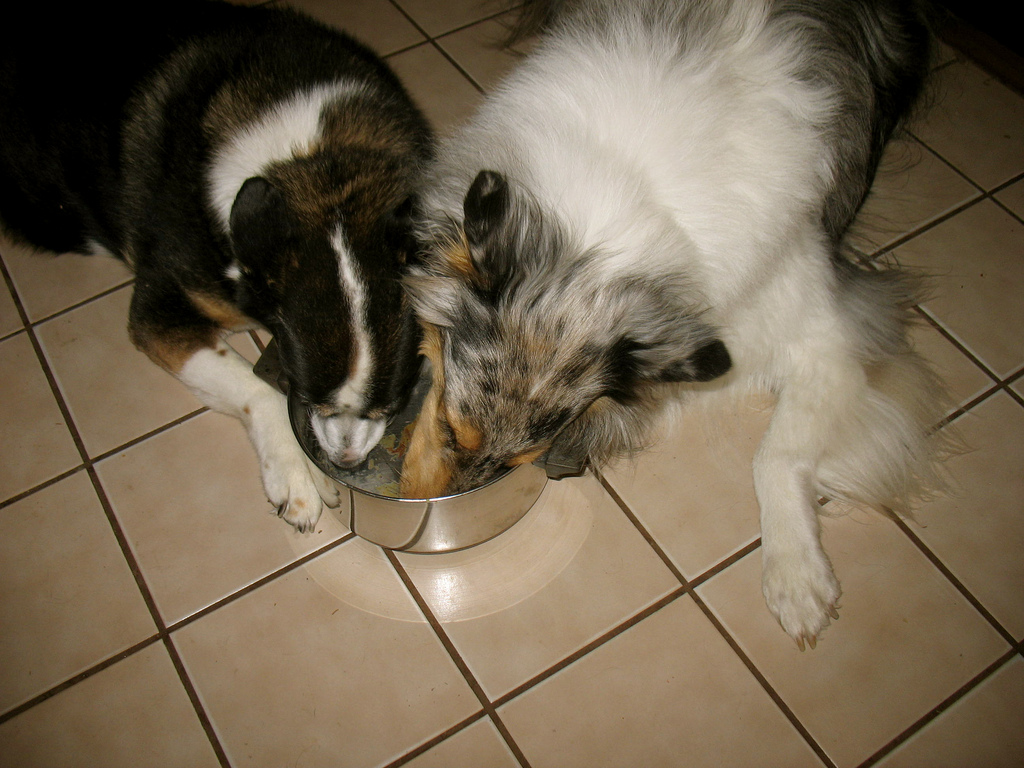 Dogs love to eat, but it’s important we teach them be patient about it. Image: dogsbylori

The danger of a dog eating too quickly

There is an obvious danger to a dog eating their meal too quickly: They could choke, just like we would if we basically tried to eat an entire meal before the person serving it to us had time to blink.

Even if they don’t choke, eating too quickly could cause your dog to gag on their food, leading to discomfort or even vomiting.

Eating too fast could also cause bloat, which is life-threatening. This is more than just food bloat, which simply means that your dog ate a lot of food and now it’s sitting in his stomach, which you may have seen in puppies.

Real bloat, which used to be called gastric dilatation-volvulus, or GDV, can quickly cause your dog to go into shock, threatening their life, according to the American Kennel Club. Bloat happens when your dog swallows a lot of air as they eat, causing their stomach or intestines to expand and twist.

If your dog looks bloated, it’s important to get them to the vet immediately. Even though it may just be food bloat, you don’t want to take the chance that it’s something much, much worse.

Why eating slowly is better

All of that means, of course, that you want to help your dog become a slow eater. Eating slowly will significantly reduce the amount of air they swallow along with their food. Think about how if you’ve ever chugged something carbonated too quickly: You probably felt bloated and just plain gross afterward.

You swallowed a lot of air while you were drinking, and if your dog does the same while he’s eating, the consequences could be far more dire than anything you experienced.

How to help your dog eat slower

Helping your dog to eat slowly can be a frustrating process depending on their personality, but it’s important to do no matter how much your dog may resent it. And you never know: You may find that your dog takes to slow eating like a fish to water once you’ve introduced them to the idea.

Here are a few ways to help your dog slow down if they’re a fast eater:

Train your dog to be more patient

The first thing you should try with your over-eager pup is to train them to be patient around food. According to Pamela Johnson, a dog trainer based in San Diego who has trained quick eaters in the past, the first step to slowing your dog down is to help them learn how to ignore food when it’s around them. That will help with impulse control, causing them to pause on their way to dive into their food bowl.

You can hire a trainer for your dog or do it yourself (Pamela has specific suggestions in the above post), but remember that the most important thing is to be patient with your furry friend. Breaking a bad habit is difficult, as most of us know, and being forceful or intimidating won’t help your cause.

You can also train your dog by limiting easy access to a large amount of food at a time. This can be particularly helpful with dogs that may have had to compete for their food in the past, because it shows the competitive eaters that they aren’t going to run out of food before they’ve had enough.

That can come in the form of adding a trickle of food to the bowl as they eat, practicing making them wait for a few seconds each time, or in the form of products specifically designed to help quick eaters slow down. Here are a couple we recommend: 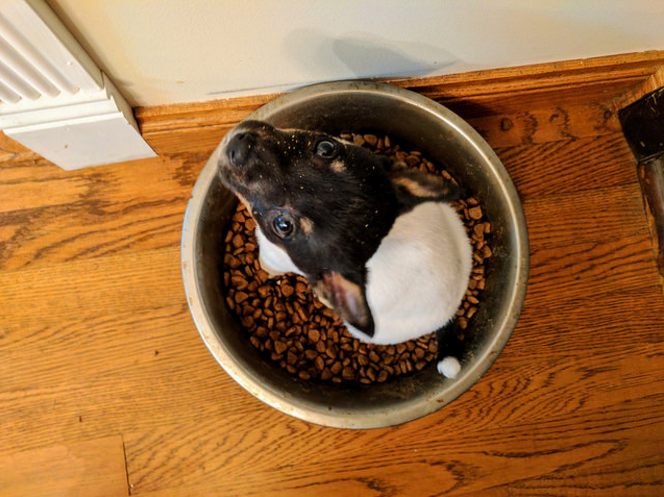 Your dog will be happier and healthier once they learn to slow down. Image: Kevin Schraer

There are plenty of tools on the market to help you help your dog slow down while they’re eating, but this slow-feed dog bowl by Outward Hound is one of our favorite.

Slow-feed pet food bowls have interrupted bottoms — knobs, rings or other shapes — that keep your dog from consuming their food to fast by not allowing them to access it all at once.

Your dog won’t be able to knock the rings out of the bottom of the bowl, so they’ll have to eat around them.

This Outward Hound bowl has been purchased more than a million times for a reason: it’s an affordable option that just works. The BPA and lead-free plastic bowl has ridges molded into the bottom of it, forcing your dog to go eat their way through a maze instead of scarfing down all their food at once.

The bowl is also machine washable for easy cleaning (use the top rack) and has a non-slip base so your dog can’t push it across the floor as they try to eat.

Outward Hound warns that the orange bowl won’t work for dogs with short noses (like French bulldogs and pugs) because of the bowl’s pattern.

Here’s what customers had to say about the slow feeder:

You can read more reviews and buy the Outward Hound Dog Bowl on Amazon.

Feeding mats are interesting because instead of simply making it more difficult for your dog to access their food, they mimic an outdoors environment to stimulate your dog’s foraging instincts and make them work for their food.

The Wooly Snuffle Mat will work for dogs of any size, making it the perfect option if your dog has had a difficult time with options in the past. It is more of an investment than a slow-feed bowl, but it’s especially worth it if your dog has learned to flip their feeder bowl or else can’t reach the food in it because of a short snout.

This mat is machine washable and 12 inches x 18 inches. It has a non-slip bottom so it won’t slide around on the floor while your dog eats and the top is made of a cotton-polyester blend. The only color option is gray.

Here’s what customers said about the Wooly Snuffle Mat:

You can see photos and purchase the Wooly Snuffle Feeding Mat on Amazon.

Having a safe, happy and healthy dog is a priority for every dog owner, and part of that sometimes means protecting your dog from itself. If your dog manages to finish dinner in seconds instead of minutes, it’s time to invest in some tools to slow them down.

Whether you train them to be more patient or purposely slow them down with one of the above suggestions, your dog will thank you for it.

Steph is a Las Vegas-based writer and dog lover who edits Natural Dog Owner. When she’s not traveling or holed up writing at a cafe, she can usually be found outside meeting new dogs.

Natural Dog Owner provides content to responsible dog owners in an honest environment with a relatable voice, helping them feel informed and better connected with their furry family member.